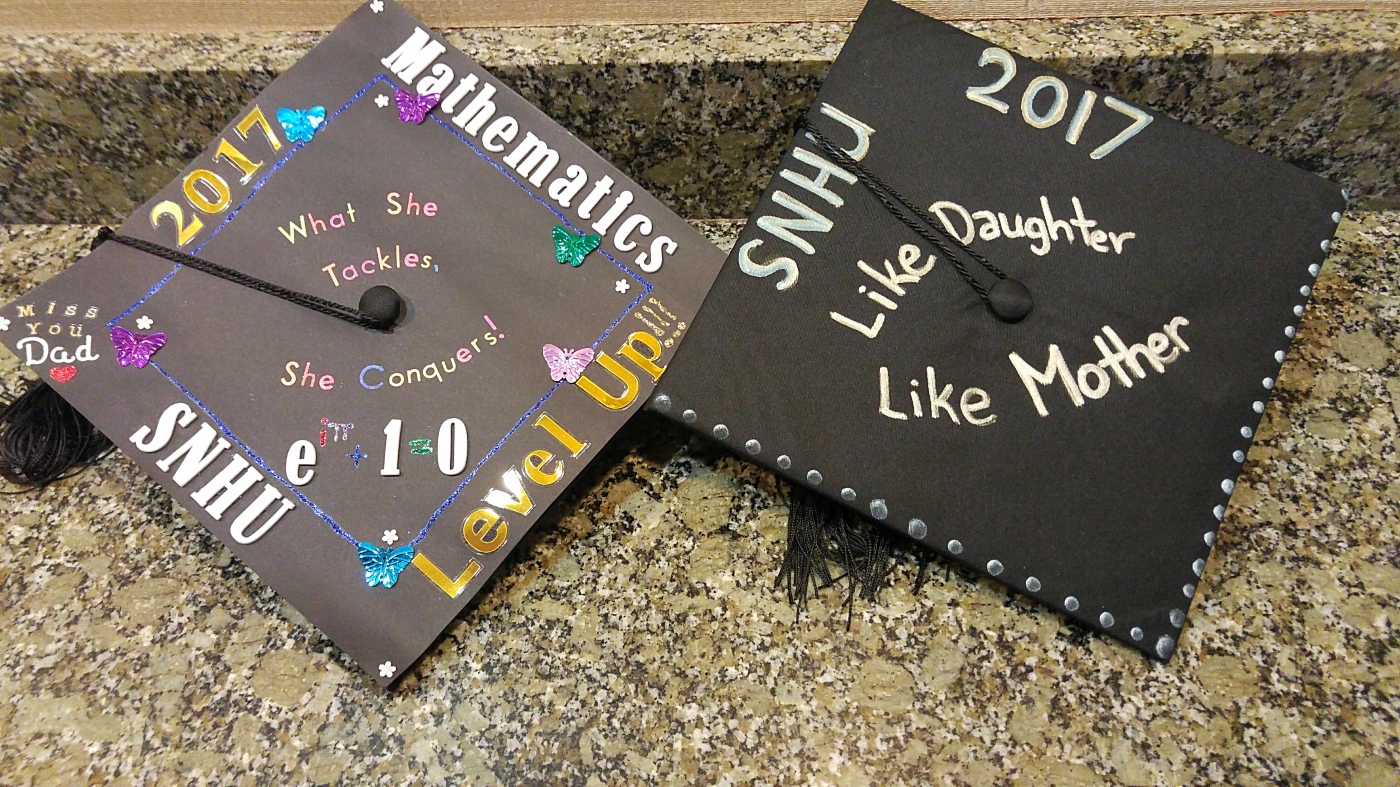 In North Carolina, I was met with the proof of a fact that I had no way of knowing when I began my journey towards graduating from Southern New Hampshire University. Having come from very intelligent parents and grandparents, yet knowing that none of them had attained what my daughter and I were obtaining in our educations; I had

never doubted that my family “had always” been literate. When I read the words, “his mark” surrounding the “x” that made Solomon Richardson’s mark, I was taken aback with the proof in front of me that my fourth great-grandfather, born in North Carolina in 1800, had been unable to read and write: He was illiterate.

My own education, in retrospect, would appear to those not intimately involved, to be a series of “fits and starts.” I remember when I became pregnant at the age of 16 (after being told due to female health problems that would be impossible) I was unsatisfied to take the GED tests, choosing rather to enroll in an alternative school that was based on the format of the local Evergreen State College and allowed me to set my own curriculum with the guidance of teachers and a counselor become friend. It was imperative to me that I actually graduate high school. I did so with one child on my lap and one on the way.

I continued my education immediately after high school, enrolling in South Puget Sound Community College’s medical assisting program. Looking back, I don’t think I would have had the guts to do so if it weren’t for my mom’s employment there. She was an integral and vibrant part of the college’s support system. Throughout my preteen and teen years, she had invited my brother and myself to the campus, introducing us to faculty members and support staff, making the school feel for us like a second home and its staff our extended family.

Having loved writing all of my life, I found myself drawn to the school’s newspaper. Although I was a very busy young woman with two very active toddlers, I would spend any free moment from my grueling curriculum in the Student Center. I learned the now archaic Apple computer with a manual on my lap and my hands on the keyboard in the room that doubled as the school’s newspaper office. I assisted with getting a paper we would call “Sounds” off the ground and was asked to step in as a Vice President of the Student Body of South Puget Sound Community College (SPSCC) when the student election had gone awry.

With more than six months to go in my program, financial aid not going far enough to cover my expenses and in the midst of a personal mental health crisis, I resigned my position with the student body. I left my writing gig at the student newspaper and got a job as a Medical Assistant/Back-Office Nurse when the need to support my tiny family overwhelmed my desire to actually finish my degree. This was 1988.

In 1989, I married my husband Bruce after we used the idea of us being engaged to prank the student government we both worked for. He knew my mother before he met me, she was an integral part of the social sciences department where he had found a passion. The campus was still my family, our wedding reception was held in the Student Center where we met and became best friends.

Our daughter, Siobhan, was born in February 1990. She was the product of our college education, although neither of us finished any degree at SPSCC. Siobhan graduated with her Associates in Arts 18 years later. It was on the same campus where her parents had met the day before her high school graduation. She embodied the epitome of our desire for our children to take education seriously.

My own education continued when Siobhan was only three. I had returned to the campus I called home to retrain when the strain of the birth of my daughter caused my first disabling condition no longer allowing me to work in the medical profession.

With Siobhan in the daycare that I helped to build while I was Vice President of the student body, I retrained in the computer field. A year and a half after I began, I once again was forced to call my education to a halt before any degree was attained. My husband Bruce was diagnosed with multiple sclerosis and his overwhelming symptoms made it difficult to maintain his employment. I quit my program and went to work for The State of Washington as a computer programmer to support our family. My dreams of finishing my education seemed to dim in the everyday chores of raising a family.

A couple of years before the blessed event of my daughter’s dual graduations, my body and brain conspired to make continuing to work at my position as a computer programmer impossible. Once again disabled, I conceded to draw a pension and concentrate on my health and the matters of domesticity. My daughter struggled through the stress of her parents losing their home and gradually losing their relationship with one another as the overwhelming stress of being disabled mentally and physically changed the shape of what she knew as “family.”

Her Grandma Joan was a beacon for Siobhan. The community college where her parents had met and celebrated their marriage became a home for her as well. She was welcomed in the position as a math tutor, just as one of her older brothers had been. Tutoring people twice and three times her age, they adored her amazing intelligence and beauty.  When she graduated with honors, no one was one bit surprised, but we were all amazed.

I was living in the middle of 37 undeveloped acres of land in a 5th wheel trailer with my new husband of 18 months in October 2015 when I felt impressed by God to ask Siobhan about this University where she and her husband had chosen to finish their degrees.  She had left the University of Washington’s engineering program after being the first in our family to ever be admitted to a four-year college when her dad and I had finally divorced. The event had not only put me without a home but had shattered her very idea of stability. She went on to find that stability with her new husband and they rapidly went about supporting each other in the pursuit of their dreams, making and achieving goal after goal together. In this same spirit, they had researched online education extensively and had chosen Southern New Hampshire University (SNHU) to be the best college to meet their needs with programs and credentials that they found exemplary.  When Siobhan posted online about a place called “the writing center,” I replied that sounded like a dreamy place. She encouraged me to apply and see if SNHU could do anything with my 130 community college credits. I made the call.

Although I had no practical way of living to most people, the lack of basics such as electricity, water or even a place to use the toilet did not deter me from what it seemed that God was calling me to do. Where there is a will, there is a way? Perhaps, but it seemed that God was guiding me to start school where many would only find impossibility. My first term back was highlighted by a blown head gasket in our truck which would strand me 5 miles away from a paved road with a partially collapsed lung. The installation of the satellite internet that student loans helped to pay for was delayed by the company so long that although I tried to complete my classes on the disposable phone from Walmart that my husband and I shared; I failed my first term back at school.

I wept. I felt utterly dejected and discouraged. My Visiting Teacher, Amy, through the local Branch of my church, was encouraging. She was a retired lawyer choosing to create her dream of a farm in the middle of nowhere.  We shared a commonality in our mental

illnesses. In spite of an increasingly abusive marriage, I found a friend and support in Amy that would enable me to continue. I was faced with overwhelming adversity, but a glimmer of hope each week in Amy’s and my weekly visits to the Snowflake Temple made the impossible to most, seem achievable to me.

This year when my second divorce was finally finished, I headed to the east: My daughter was to be graduating summa cum laude from SNHU in Mathematics on Mother’s Day. Every mechanic that looked at the little Volvo which was my only return from my second marriage of three years deemed it impossible. Every time I prayed, and every Priesthood Blessing I received said it could be done. I persevered in the face of impending doom and followed every impression on the journey. Just days before Easter, I arrived in New Hampshire and toured the “brick and mortar” campus of SNHU: It was real. I made it.

Through the intense assistance of my first-year adviser, Lauren, and then her follow-up, my “senior adviser,” Liz, I recovered from that disastrous first term. When my credits began accumulating quickly, we realized I may also be eligible to graduate this May. I was frustrated when life and the college schedule extended my classes out through August but was thrilled when the university stated that I could walk with the class of 2017 in spite of the fact I was finishing up in the summer. My daughter and I would be walking for graduation the same weekend.

This Mother’s Day weekend was fabulous. Dreams that I never thought I could dream have come true. By pursuing her education, Siobhan became the first in her father’s family and my family to achieve her Bachelor’s degree after also being the first in both our families to earn her Associate’s. She has made me so proud and she has now made education more possible and inviting for generations of our family yet to come.

We both have learned to “make our mark,” after coming from those who could do no

more than to sign with an “x.” I know that our ancestors worked hard and traveled to distances trying to make a better life for their children. The pioneers of our families did all they could while imagining more significant opportunities for future generations. As I traveled across the country to receive the honor of my degree and watch my daughter receive hers, I realized that we are the product of those hopes and dreams. I thank God for relatives that reached across the veil to help me to understand that.

Watch: A video from backstage at the SNHU Arena

7 thoughts on “Making Our Mark”